Headquarters of the Fundation

From the headquarters the Foundation works to achieve its aims.

From the headquarters the Foundation works to achieve its aims.

Temporary Headquarters. Miguel Delibes Foundation has its actual headquarters at the Casa Revilla in Valladolid.

The townhall of Valladolid, Board Member of the Foundation, has provided a wide and renovated place in this building to respond with its compromise of giving the institution a headquarters where the Foundation can develop its activities.

The Foundation share this space with other departments of the Municipal Cultural Foundation of Valladolid´s Townhall.

From this headquarters the Foundation of Miguel Delibes works to achive its aims. 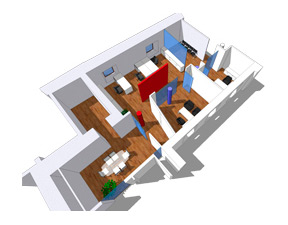 Distribution of the spaces of the Foundation 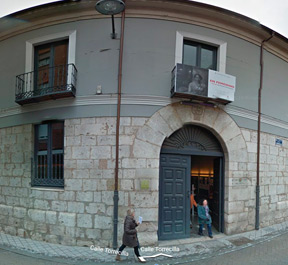 Casa Revilla is located in the historic center downtown Valladolid and its plan is that of a traditional type of urban house that has its roots in the XVI and XVII centuries.

The building gets its name from the Revilla Marquess who lived there during the 16th and 19th centuries. In 1852 Manuel de la Cuesta, Dean of the university, bought the building and later on it would be inherited by his daughter Dolores de la Cuesta y Polanco who got married with Francisco Cossío y Salinas the latter was the grandfather of a former director of the newspaper El Norte de Castilla, Francisco de Cossío Martinez-Fortún. When Martinez-Fortún died, the mentioned building was adquired by the Townhall of Valladolid to be used a “Culture House”, that was the precedent of the actual Municipal Foundation.

Final Headquarters. From the moment of its formation in March 2011, Miguel Delibes Foundation stablished as one of its main aims to preserve the writer´s legacy handed over to the Foundations by his heirs. The intention of creating a museum for the writer´s working spaces, working office, living room and library, joined to the purpose of guarding his archive of documents, art works and personal belongings demands the necessity of a building that provides enough space and proper conditions to be home of all that.

All those requirements are fulfilled in the building known as “Dormitorio de Maquinistas” (Engine Driver´s Bedroom) at the North Railway Station in Valladolid (Estación del Norte/ Estación Valladolid Campo Grande)-future Headquarters of the Foundation. With this premises the Townhall of Valladolid is considering the programmed renovation and use of the historical railway buildings. According to the urban plan of hiding the railways would make possible the use of the mentioned buildings for the Foundation´s purposes.